Once concluded in February 2021, the cash-plus-stock deal will see EnvisionTEC become a wholly-owned subsidiary of the publicly-listed Desktop Metal. The acquisition represents Desktop’s first move into the DLP market, and provides it with access to the growing additive dental, jewelry, and bio-fabrication industries.

“I’m thrilled to partner with Al [Siblani] and the EnvisionTEC team to bring significant growth to the additive market,” said Ric Fulop, Founder, and CEO of Desktop Metal. “Together, Desktop Metal and EnvisionTEC have an opportunity to shape the future of Additive Manufacturing 2.0, and transform how parts are made around the world.”

Through its acquisition deal, Desktop Metal has purchased 100% of EnvisionTEC’s shares at an aggregate purchase price of $300 million. Not all of the funding will be paid in cash, and Desktop Metal will only be required to pay $150 million up-front, with the rest being retained by EnvisionTEC shareholders as stock in the newly-merged company.

Although the agreement is subject to the customary closing conditions, it’s expected to be concluded in short order, with EnvisionTEC founder Al Siblani staying on as the subsidiary’s CEO. For Desktop Metal, the acquisition ends months of speculation over its potential takeover targets, which began after its merger with Trine Acquisition last year.

The merger, which valued the new company at $2.5 billion, provided it with a $580 million war chest to capitalize on growth opportunities, and it went live on the NYSE. With its purchase of EnvisionTEC, Desktop Metal has now answered a lot of questions about its ambitions, by showing that it views DLP as vital to the success of its ‘Additive 2.0’ project.

On a call with analysts, Desktop Metal CEO Ric Fulop highlighted several reasons behind the firm’s purchase. Describing EnvisionTEC as “the original innovator in DLP,” Fulop pointed out that although most of its processes are now deployed by “other players in the market,” its continuous polymer printing patents prove its founding role within the industry.

Desktop Metal was also impressed by the potential of EnvisionTEC’s upcoming DLP 8K Xtreme machine, which it claims is significantly faster than both Formlabs’ 3L and HP’s MJF 5200 systems. Powered by the firm’s patented Projection Array technology, the 8K effectively uses a ‘closed-loop’ printing process to create parts that exhibit “desirable qualities.”

EnvisionTEC’s large-format printer is characterized by a huge 71-liter build volume, and Fulop asserted that it would provide users with “dramatically better price-performance” than its competitors. In addition, despite continued market turbulence, the 8K remains scheduled for a Q1 2021 release, meaning that Desktop could get a rapid return on its investment.

Once the merger has been completed, the firms plan to seek out collaborative opportunities, and they’ve already earmarked EnvisionTEC’s RAM binder jetting machine as one to watch. The device is essentially an ABB robotic system, that’s designed to offer clients a cost-effective method of producing investment casting and design models.

Compared to legacy sanding systems, the firm claims that the RAM is 25-50% cheaper, while remaining capable of constructing builds as large as 1828 x 914 x 914 mm. Now, by integrating its Single Pass Jetting (SPJ) technology into the machine, Desktop says that it can “dramatically enhance” its performance, and better address the digital casting market.

Desktop’s acquisition could open up new markets to its products too, and by absorbing EnvisionTEC’s distributor network, the firm will go from having 80 partners to over 200. Significantly, given the widespread applications of the Envision One within dental 3D printing, Desktop will also be able to expand into what is a growing $10 billion industry.

In this light, EnvisionTEC’s customer base of 1,000 orthodontic users, and its 190-strong material portfolio (60 of which are dental), provide Desktop with a ready-made foothold in a lucrative market. According to Fulop, the firm’s wide range of qualified materials is “one of the largest in the industry,” and he emphasized that it remains “decades ahead in this area.”

Additionally, the firm has developed two new biocompatible resins called the E-Dent 1000 and E-Denture Pro, which are currently undergoing 510k clearance. Fulop described both as “industry-leading materials” in terms of flexibility and strength, which are capable of yielding novel devices such as same-day arch implants, that “completely revolutionize the market.”

Elsewhere, the two companies have also identified chrome cobalt dentures and jewelry as other areas of opportunity, where combining their technologies could provide them with better market penetration.

“Following the acquisition, our dental clients can now get the parts they want through Desktop’s technology,” Siblani told analysts during the call’s Q&A.

“We also see a lot of synergy in the jewelry market,” he added. “We’ve been a leader in that trade for the last fifteen years because of our material set, and the resolution we can deliver. [Desktop’s technology] will now be translated to some of our larger casting customers, who can go directly to using binder jetting technology for printing gold.” 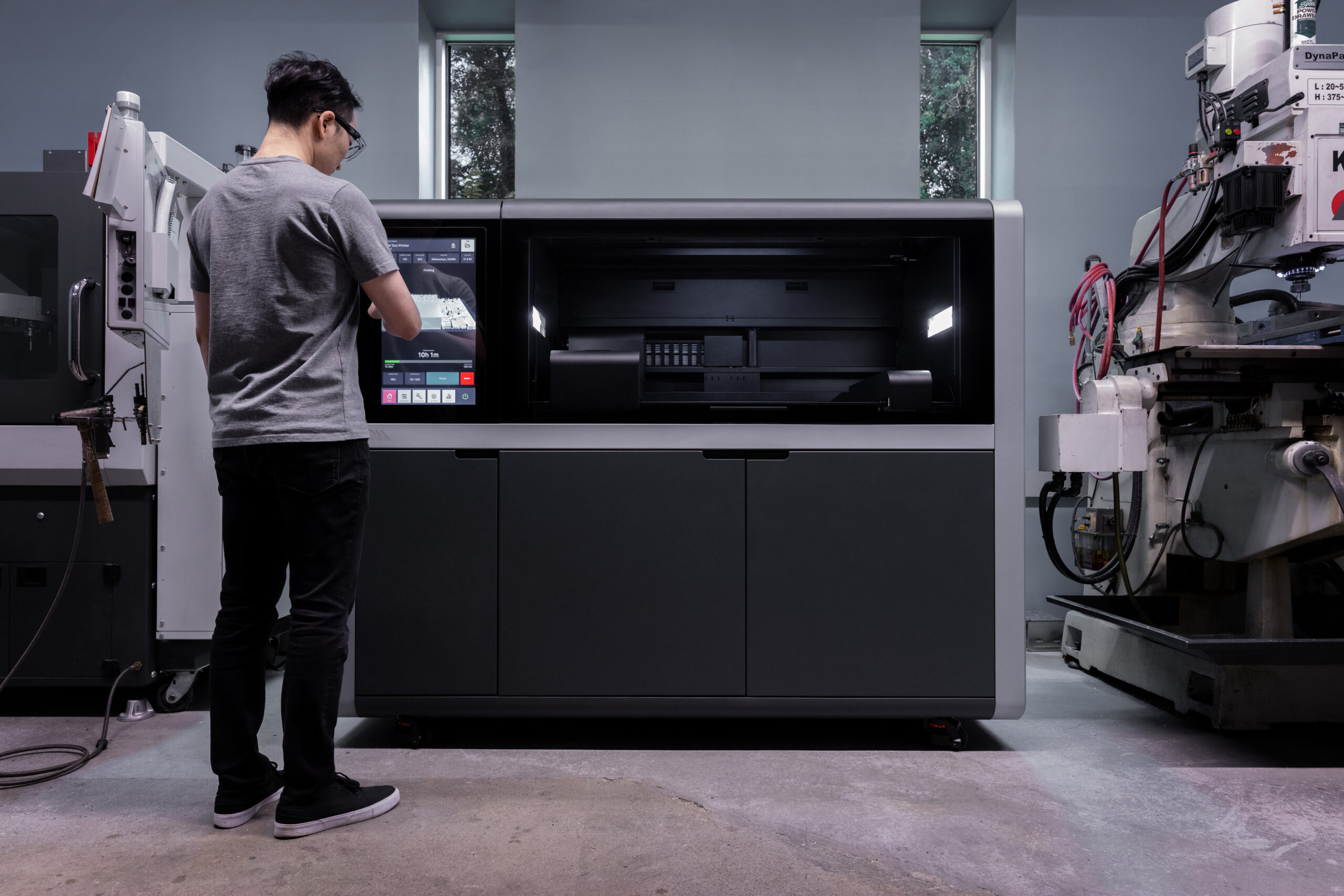 EnvisionTEC has invested heavily in biofabrication via its Bioplotter platform, and Desktop’s acquisition also allows it to access an emerging market in 3D bioprinted implants. The Bioplotter itself is capable of printing biocompatible parts for medical use within bone regeneration, soft tissue surgery, optimized drug release, and in future, fabricating organs.

Given the technology’s relatively early stage of development, it has often been applied within R&D, and over 1,000 major publications have credited the machine with assisting scientific studies. However, bioprinting is also increasingly being used to fabricate cartilage tissues for injured athletes, and this is something that Desktop now intends to explore.

Fulop emphasized on the call that EnvisionTEC was also a “biofabrication pioneer,” and that the acquisition provided it with “another opportunity for channel leverage in a nascent market.” Although Fulop conceded that the technology isn’t ready for end-use application yet, he expressed excitement about its “incredible potential” over the next decade.

“It [biofabrication] has now matured in the research community to the point where we’re going to see cartilage and bone regeneration in areas such as sports medicine,” explained Fulop. “Those aren’t going to be next year, but by the end of the decade it’s going to be a major technology, and it’s something we’re going to continue to invest in.”

One obvious result of the merger is that Desktop Metal has gained access to a new DLP vertical, something it views as critical to its ‘Additive 2.0’ strategy of mass-producing polymer parts. Although the move puts Desktop in competition with existing manufacturers such as Carbon, Fulop maintained that in EnvisionTEC, it has found a “diamond in the rough.”

Desktop Metal’s acquisition also raises the question of whether it represents an ongoing trend, and if the 3D printing market is beginning to consolidate. The ongoing pandemic has hindered the recent revenue growth of many small additive companies and prompted their share prices to fall, but this has created purchasing opportunities for the better-financed firms.

Stratasys, for instance, acquired DLP manufacturer Origin for $100 million last year. Elsewhere, 3D printed electronics producer Nano Dimension has been steadily accumulating capital, and the company has now raised over $1 billion in funding, encouraging speculation that it too is lining-up a potential industry acquisition.

Please do read the original article published on the 18th of January by Paul Hanaphy here.