At the recent RAPID + TCT event, held in Detroit, the 3DPrint.com team saw many new products and innovations and spoke with many companies about what they were currently working on. While at the show, I stopped at the massive Desktop Metal booth to speak with Larry Lyons, the company’s VP of Product. The company was founded four years ago in Massachusetts, and has 3D printed nearly 10,000 parts on its desktop-based DM Studio System, which was launched back in 2017 along with the DM Production System just ahead of that year’s RAPID event.

In the years since it came galloping onto the metal AM scene, Desktop Metal has been busy raising funds, increasing the production and expansion of its Studio System, and expanding its materials portfolio, adding options like 316 stainless steel, 4140 carbon steel, and copper. Lyons explained to me that it’s hard to control the laser melt pool when printing with copper which means that laser based 3D printing methods have struggled to print with the metal. Only some EBM users have made it work while very few (namely Italy’s Beamit) have made it work with DMLS. The issue is that the material is so conductive, but Desktop Metal is able to “print this material as fast as stainless steel,” compared to which it has better thermal conductivity. 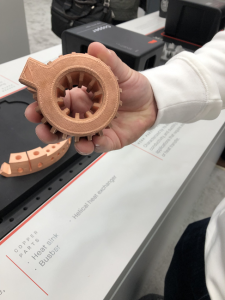 Speaking of steel, the company is also offering H13 tool steel. Because this material is so tough, it’s often used for die mold making, but Lyons explained that lead times can be really long when making the molds with laser-based 3D printing systems.

When I arrived at the Desktop Metal booth, I immediately noticed the metal 3D printed nametag that Lyons was wearing, which he told me was created on the company’s Studio System.

“DMLS is not cost-effective,” he said, noting that “Desktop Metal can show what the technology is really able to do with pieces like this [nametag].”

The company’s big mission at RAPID this year was to give attendees a closer look at some of the main customer applications of the office-friendly Studio System, and how it offers these customers more design freedom, in addition to major cost and speed savings.

First, Lyons told me that the company is installing its second Production System at a Fortune 500 company this month, and that millions of parts for use cases have been completed on the printer, including a drill bit that’s saved Milwaukee Tool a lot of money. Additionally, Desktop Metal announced during RAPID that it has entered into a strategic partnership with Indo-MIM, the world’s largest supplier of Metal Injection Molding (MIM) precision-engineered products. Together, the two plan to accelerate the adoption of metal 3D printing around the world, and Indo-MIM will soon install the DM Production System at its Texas facility.

But, while some Production customers allowed Desktop Metal to showcase some of their parts at the show, they “can be pretty tight-lipped about using their names.” Lyons said that this is not the case with Studio System customers – Desktop Metal has collected data and use cases on over 1,000 customer benchmarks to get a good feel for how these parts made on its machine are being used.

Several leading companies shared their Studio System experiences and applications with Desktop Metal, and the company reports that each one of the parts it’s looked at has shown a major reduction in cost, in addition to time. The top three applications customers are using the DM Studio System for are:

Applications in functional prototyping require parts that meet specific chemical and thermal requirements, and most customers need prototypes to be fabricated in the same materials used for mass production. According to an email from Desktop Metal, John Zink Hamworthy Combustion manufactures the UHT Atomizer fuel nozzle, which is often used in combustion engines for steam propulsion boilers on LNG tankers. This nozzle can only be manufactured with 3D printing, and was redesigned to be more fuel-efficient; it was printed on the DM Studio System out of 316L steel, and then went through surface finishing for final use.

It can be lengthy, difficult, and costly to manufacture tooling like extrusion dies and inserts for injection molding using traditional machining. Jigs and fixtures made up 25% of the early applications on the Studio System, with tooling at 15%, as having the in-house metal 3D printing makes it possible to iterate and replace worn out tooling more quickly, which helps reduce tooling lead times.

Those who use the Studio System say it’s helping to enable low-volume production of pilot runs and custom, aftermarket, and replacement parts, for which methods like CNC machining and casting are not ideal. Mining equipment drilling solutions provider Master Drilling is using the metal 3D printer to produce replacement parts on-demand, and ended up with a 25% cost savings, in addition to reducing the lead time down from eight weeks to just one, for a sun gear made out of stainless steel.

Lyons told me that Desktop Metal is “moving past just medical and aerospace” applications, and is creating more automotive parts, in addition to products like a shower spindle for a hotel bathroom.

“We may not necessarily see these parts, but we touch many of them often,” he said.

Owens Corning normally uses Inconel to 3D print fiberglass insulation so that it can hold up in extreme temperatures, but Lyons explained that this material is costly and difficult to shape. With the DM Studio System, the company is majorly reducing the cost, and making it easier to create, these and other parts, including augers. Caterpillar is using the DM Studio System to help keep its tooling up to code, as it has a 40-year spare parts agreement with its customers; 3D printing parts like housings on-demand helps the company eliminate unnecessary overhead.

Then, Lyons walked me across the booth to meet Senior Software Engineer Andy Roberts, who created the company’s Live Parts generative design software. The Live Parts tool is designed to actually grow parts for AM, as well as integrate with SOLIDWORKS as a plug-in.

Roberts then demonstrated Live Parts, and its ability to optimize the strength-to-weight ratio of a product in real time, with a design for a skateboard truck. He explained how it was easy to increase the forces in order to see real-time part growth.

“A lot of parts, like this skateboard truck, are all cast, and cast parts typically are fairly simple – they don’t have a lot of undercuts and features that would require machining or post-processing,” Roberts explained. “But when you go to 3D print a part like this, there’s no need to adhere to the simplicity of that. You can make it lighter and stronger. The question is, how do you know what to do?”

Answering his own question, Roberts turned to a nearby computer, which had a design for the skateboard truck already pulled up in Live Parts. He later told me that it had only taken three minutes to “grow” the part.

“It’s literally growing this part in real time, as though it’s a living organism.”

He showed me one example of the truck where the team told Live Parts to grow the design inside the existing part, “like a cage,” but said that it wasn’t “very interesting.”

“And then we kind of let it go crazy,” Roberts went on. “We said, well, you can’t grow into the other parts, but when you let it really go and do its own thing, it gets much more organic. And so these become lighter and stronger, depending on the material you’re using, because it generally tries to push the material out far away from the core. It’s more like the way a tree would behave.”