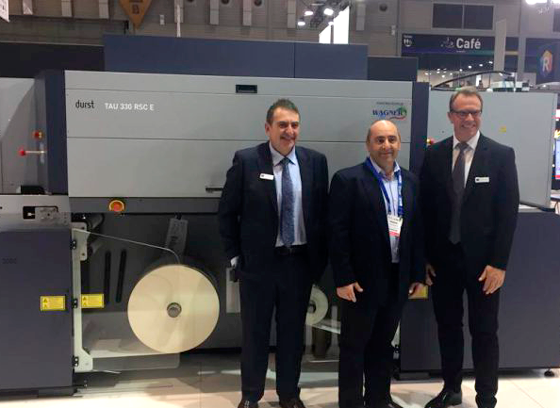 Aussie labelling company, Wagner Labels, has purchased the Durst Tau 330 RSC E and its converting equipment in a “substantial investment” worth well over $1 million.

The investment makes Wagner Labels a new customer for Durst and is the first Tau RSC E installation in Australasia.

“The main agenda for Wagner Labels was to increase the capacity of its digital offering and to expand into new markets,” he said.

“For us, as a company, it means that we’ve secured another important client – someone that is established and has been in business for more than 80 years. From a Durst perspective, we know that he’s thorough in his assessment of solutions in the market but chose the Tau as the product to take his business to the next level.

“It’s also an acknowledgement by a well-respected label house that Durst’s pre-sales, sales and post-sales structure has met the requirements of the business.”

Sanelli also mentioned that the Tau is a fully scalable system, enabling Wagner Labels to upgrade the solution in width, colours and speed without a forklift.

“So, for on the field upgrades, if they have a capacity issue, they can upgrade the Tau instead of running a second shift or having to purchase a separate unit. They’ll get a 40 per cent productivity increase just by scaling the system,” he said.

Wagner Labels managing director John Galea said the features of the Tau impressed him and was the reason behind the purchase.

“We were looking for speed and quality, and we felt that with the options out there that the Tau provided the best solution. Its resolution – 1200 by 1200 dpi – is probably one of the best in the market now,” he said.

“We have been dominating as a label printer and have been looking into moving into the packaging space, so the Tau gears us up for that space. The purchase was for expansion, not replacement, so it complements the other solutions that we use.”